Microwave Kinetic Inductance Detectors (MKIDs) – are superconducting detectors capable of counting single photons and measuring their energy in the UV, optical, and near-IR. MKIDs feature intrinsic frequency domain multiplexing (FDM) at microwave frequencies, allowing the construction and readout of large arrays. The basic operation of an MKIDs are:

– Photons with energy hν are absorbed in a superconducting film, producing a number of excitation, called quasi-particles.
– To sensitively measure these quasiparticles, the film is placed in a high frequency planar resonant circuit. The change in the surface impedance of the film following a photon absorption event pushes the resonance to lower frequency and changes the amplitude and phase of the transmission through the circuit (c and d). 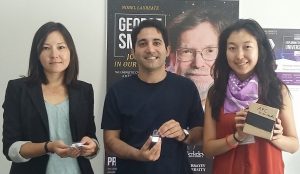