The Optical bands are the final frontier for investigating very short time scale phenomenon in Astronomy – very little has been done in this wavelength regime.  Gamma-ray bursts, huge cosmic explosions, were discovered when astrophysicists searched for time variability, and indeed variations to below <~ 10 ms have been found. When even the low-energy radio bands were checked for high-speed phenomenon, Fast Radio Bursts (FRB) were discovered (see our FRB research page here).  Now known to be from star forming regions of distant galaxies (at least in one case; Chatterjee et al. 2017), the emission physics of these bursts remains unknown.  They would never have been discovered if radio astronomers had not looked for transients in the ~ ms regime.

However, no phenomenon have been discovered in the optical on < 1 s timescales (though transients from the Crab and other sources have been measured). Using ultra-fast array detectors such as MAPMTs or SiPM arrays, we can probe variations in the sky down to nanos time scales.

How would you design an instrument that would differentiate between electonic “glitches” and real transient signals on these very short time scales?  In the diagram below (Concept by G. F. Smoot), a beamsplitter sends two identical beams, to identical detectors; an authentic signal must be present in both beams. Therefore, we use a coincidence logic implemented in an FPGA to analyze these signals (see our electronics shop page here[link]).  What if the signals show perodicity? We can analyze very fast signals by implementing an FFT algorithm in FPGA as well. 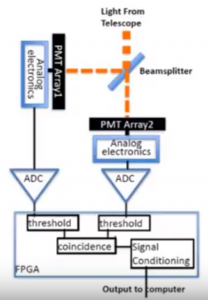 This project pushes the boundaries of our knowledge of the transient sky by pushing down to new time scales in the optical, and it pushes the frontier of processing FFTs at high-speed for data compression using smart “triggered” data recording.  Look for discoveries of completely new phenomenon, or maybe E.T. phoning home with visible light, over the fiber-less network in space